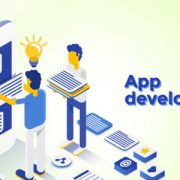 App development went from “what-a-fad” to “ignore-me-if-you-can” before a lot of businesses could count the eggs in the basket. This has brought us to a stage where every business that can function digitally has the potential to reach their customers through a mobile app.
In 2019, mobile screens are bigger with a never-before screen-to-body ratio. Naturally, app developers and UI artists have the chance to make their app experiences all the more immersive. Like with every other piece of hot tech, app development will jog around a set of distinguishable trends. Here’s a roundup on all that’ll be happening in app dev in 2019.

Artificial Intelligence is powering a bunch of powerful technologies. An increasing number of organizations are using these technologies in their respective development periods. What we really need is a set of easy-going tools that are as friendly for developers as they are for data scientists.
A Gartner survey points out that by 2022, 4 of every 10 application development engineers will have expertise in Artificial Intelligence. If this is any indication to go by, it is high time developers revved up their game and added AI to their skill set.

App stores have been around for several years now. And customers are now way more confident about spending money on app stores. Multiple reports by independent organizations have pointed out that earnings in app stores the end of 2019 could range anywhere between $120 billion and $150 billion.
If these reports come out to be even half-true, the app store consumer trend will actually grow five times faster than the global economy. Imperatively, a lot of this growth will be fueled by the rapid rise of online gaming apps.

As a technology, blockchain has immense potential to change the security metric in every industrial landscape. It does so largely by democratizing trust, promoting never-before transparency, and cutting down friction to a bare minimum across several different business ecosystems.
Most CIOs are have begun realizing the immense potential of the blockchain technology just about now. That is enough to suggest that 2019 will be a great year for technology. Pilot starters like Walmart and Maersk are already looking at moving beyond the test projects and deploying blockchain into their core competencies.

With the advent of community-based games like Fortnite and PUBG, mobile gaming reached unprecedented highs in 2018. This year would be even bigger with the top games receiving brow-beating competition from a long line of earnest developers.
The mobile gaming experience is also getting more immersive by the day with larger mobile displays. Expanding scree-to-body ratios give users a larger playing area. As already stated, addictive mobile games will constitute of the lion’s share of app store earnings, mostly through in-game purchases.

On average, we watch videos for 10 out of every 60 minutes. That’s a lot of time compared to how it used to be not more than five years back. will continue to be the dominant choice for most people streaming videos on mobile.
The cool thing is that traditional short video apps like YouTube will not be alone in the battle. Social sharing apps like Tik Tok and others will also have an overbearing influence on videos.

Data privacy and ethical standards are coming out as prime concerns for stakeholders across the board. This includes individuals, organizations as well as governments. As it is, the digital ecosystem is dynamic and evolving rapidly.
As the environment gets highly charged and looks vulnerable, there will be a higher focus on risk reduction and compliance. GDPR has definitely shown the doors to superior data privacy and ethical standards. Several states in the US and planning on similar data privacy standards and regulations of their own.

The technological evolution is unfolding right in front of us. The fine lines between the physical and the digital world do not exist anymore. Minimally immersive user interfaces are now rising to the fore. Leading the way are conversational platforms that rely on minimally immersive interfaces to bring about a paradigm shift in the UI landscape.
Futran Solutions specializes in delivering composite app development, testing, and deployment. As applications of app development in business is evolving, so are the resources that shoulder these needs within an organization. Speak to a Futran App Development specialist today. Find out how we help you achieve your business and marketing objectives.