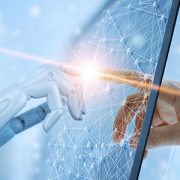 Automation is not a new phenomenon. It comes with its own baggage of promises of development, prosperity and what not. In today’s world, robots do most of the physical work and that too, at a cheaper rate than humans. But it is also capable of cognitive functions like sensing emotions or even driving. But how quickly would this automation become reality? It is important to know these automation key trends to predict future development.

Automation of activities has enabled growth both at an individual level and at the business level. Will these impact on the employment and global economy?

Here are some of the automation key trends to watch out for in the IT domain in 2020.

Automation of technology to replace humans

The technology used for automation of tasks that once required humans is known as Hyperautomation.

The application of machine learning and artificial intelligence is increasing to automate processes. A range of tools can also be automated in Hyperautomation. It can be also referred to as sophisticated automation.

The main goal of Hyperautomation is to increase AI-driven decision making. This can be achieved by including robotic process automation(RPA) and intelligent business management software (iBMS). While it’s not the main goal, but Hyperautomation often results in the creation of a digital twin of an organization (DTO). This is one of the important automation key trend of all.

Technologies like AR (Augmented Reality) and VR(Virtual Reality) come under immersive experience. This is also known as Multiexperience.

It is far apart from the traditional method of single point interaction. It covers multisensory and multi-touchpoint interfaces like computer sensors.

For example, Dominos pizza added a smart speaker communication and pizza tracking feature to their app.

The focus is to gain easy access to technical and business expertise without any extra cost or training. This is often known as Democratization. It is mainly based on application development.

Some of its key factors are data, analytics, and citizen access. Citizen access is also known as design and knowledge. This has also led to an increase in the number of data scientists, programmers and more.

Democratization would enable developers to rather rely on AI-driven development to generate code or automate testing.

Cognitive augmentation enhances the ability of the human body to function, think and make better decisions.

Ethics, integrity, openness, accountability, and consistency are the five key elements this trend requires. As the evolving technology increases development and prosperity, it also creates a trust crisis.

Most of the times AI and ML are used to make a decision in place of humans. This evolves trust crisis. Such a condition drives the need for ideas like explainable AI and AI governance.

Edge Computing is a technology where sources of information are placed closer to information processing and content collection. This reduces the latency by keeping traffic local and distributed.

This includes IoT. IoT stands for Internet of Things. Moving the key application and services closer to people and the devices is known as Empowered edge .

All the aspects of cloud service is the responsibility of the cloud provider. Owing to this, cloud centers can be located at different locations. This not only reduces latency but also solve stubborn technical issues.

The exploitation of AI to perform tasks usually done by humans is performed by Autonomous things. The Spectrum of intelligence ranges from semi-autonomous to fully autonomous things. It includes a variety of environments such as air, sea, and land.

Autonomous things include drones, ships, robots, and other appliances. These things are also used in collaborative swarms. For example, drones can be used in the Olympic games.

Evolving technologies like autonomous things and Hyperautomation, lead to economic development. It also offers transformational opportunities in the business world. However, it leaves security vulnerable.

AI security could be vulnerable and could be a potential point of attack. Security teams must address these challenges and be aware of how AI will impact the security space.

Creativity and strategy are still human skills even though the world is getting automated rapidly. Bots can automate a multitude of designs and admin tasks but cannot automate creative thinking. It’s simply a matter of identification as in which things are done manually and which things need your input and imagination